Akbar Muhammad, vice president of Father Son Men & Boys Inc. talks about a partnership to combat violence between the Islamic community and the Bronze Shields, an organization of African-American police officers in Newark police department. (Barry Carter | The Star-Ledger)

Akbar Muhammad has worked with boxing’s greatest fighters as an executive with more than 40 years in the sport.

But Muhammad, a Newark native and former vice president of Top Rank, Inc., has a new alliance and position geared toward challenging a tougher opponent in his city.

Muhammad is vice president of Father Son Men and Boys, Inc., a 23-year-old Newark mentoring organization that has called on the city’s Islamic community to combat violence through an alliance with the Bronze Shields, an organization of African-American police officers in the Newark police department. Levi Holmes (right), president of the Bronze Shields, talks with Akbar Muhammad, vice president of Father Son Men & Boys, Inc., about a partnership to combat violence between the African-American police officer’s organization in Newark and the Islamic community.

The two groups joined forces this past Saturday during an anti-violence rally in which Muhammad, who is Muslim, was blunt about what needs to happen in Newark’s Islamic community and beyond.

“We have to turn them in,” said Muhammad, speaking about criminals, even those who profess to be Muslim.

On his way to work in Newark, Muhammad, who operates Akbar Productions, a boxing entertainment company, said it disturbed him to see “so-called Muslims” shoplifting and selling drugs on downtown city streets.

“We have to give their names to the police.” he shouted.

With support from The Council of Imams in New Jersey, an assembly of Imams from Essex Hudson, Union and Passaic counties, Muhammad said masjids have to become mentoring centers for young people and Muslims must organize their blocks against neighborhood decadence. Imam W. Deen Shareef, convener of The Council of Imams in New Jersey, speaks at the anti-violence rally in Newark.

The anti-violence gathering was held at the Clinton Avenue Community Soundstage, a venue for cultural and artistic performances located in a troubled South Ward neighborhood two blocks away from Newark’s police headquarters.

Police cars sped past the area, sirens blaring, while this new alliance solidified a pledge between the police organization and the Islamic community to work with one another.

Bronze Shields President Levi Holmes said he welcomes the opportunity because the desires of Muslims are the same as African-American police officers, many Newark born.

“They want men and women in the community to stand together and speak out against violence,” said Holmes, who also talked about reaching young people.

The work to be done is greater than the crowd size Saturday, but those who showed up to the rally didn’t care about the small turnout. To them, the crisis has to be solved from within the community, not by police and politicians. Imam W. Deen Shareef, convener of the Council of Imams in New Jersey, said conscientious folks have to “kill the tolerance for abuses” in order to save the lives of children.

Now is not the time to be in the background to make a difference, said many speakers, adding their voice to the chorus.

“It’s a travesty how many children we bury because of these streets,” said Aqeel A. Mateen of United Muslim Inc. in Newark.

“We have to drill it in their heads that longevity has its place.”

But the brick mason of 40 years is fed up, too, with what’s going on. Shakir was uncomfortable taking the stage to speak, but he came out his comfort zone anyway because the rally was that important to him.

Much of what was said has been covered in many anti-violence demonstrations by groups challenging residents to step up and condemn those tearing down their communities. Unfortunately, however, many fall off when it’s time to get involved.

Muhammad believes this effort is going to be different.

“This is not a show,” he said emphatically, speaking loudly into the microphone. “We’re out here now and we’re committed.” The Newark Bronze Shields would like to help relieve some of the financial burden by awarding ten $1000 scholarships to Newark Public School high school seniors. 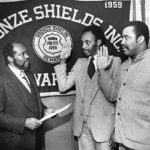